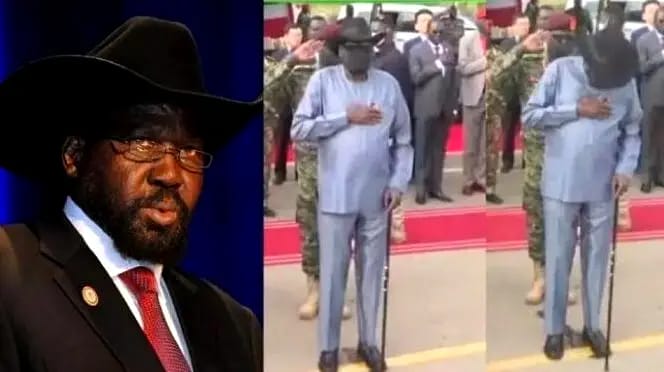 Six journalists in South Sudan have been detained over the circulation of footage showing President Salva Kiir appearing to wet himself at an official event, the national journalists union said on Friday.

The footage from December showed a dark stain spread down the 71-year-old president’s gray trousers as he stood for the national anthem at a road commissioning event. The video never aired on television but subsequently circulated on social media.

The journalists, who work with the state-run South Sudan Broadcasting Corporation, were detained on Tuesday and Wednesday, said Patrick Oyet, president of the South Sudan Union of Journalists

They are under investigation over footage that went viral on social media in December, according to the reports, the New York-based Committee to Protect Journalists (CPJ) said in a statement issued late Friday.

An official from SSBC quoted by independent station Radio Tamazuj said the outlet did not broadcast the footage.

“Authorities should unconditionally release these six SSBC employees and ensure that they can work without further intimidation or threat of arrest.”

The Union of Journalists of South Sudan also called for a “speedy conclusion” of the investigation into the six, who it said were suspected of “having knowledge of the release of ‘a certain footage’ to the public”.

“If there is a prima facie case of professional misconduct or offence then let authorities expedite an administrative or legal process to address the issue in a fair, transparent (manner) and in accordance with the law,” it said in a statement on Friday.