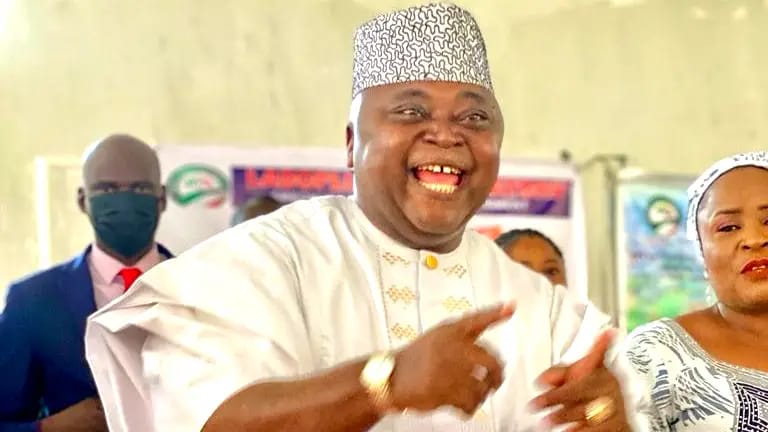 The spokesperson for the Coalition of United Political Parties, Ikenga Ugochinyere, on Sunday, told the factional governorship candidate of the Peoples Democratic Party in Ogun State, Ladi Adebutu, to concentrate on his shaky ambition “instead of sinking with the embattled national chairman of the party, Iyorchia Ayu.”

Adebutu had recently urged the Rivers State Governor, Nyesom Wike, and other party members to leave the party if they could not work with Ayu.

Wike and five other PDP state governors, as well as some other party leaders, including Chief Olabode George and Ugochinyere, have been calling on Ayu to resign for a new national chairman to emerge from another zone.

But Adebutu said party members against Ayu could either abide or leave to go and form their own party.

Ugochinyere, in his reaction in a statement, said only enemies of the presidential candidate of the PDP, Atiku Abubakar, and his ambition would insist that Ayu should remain in power despite the outcry against him.

While describing Adebutu’s utterance on the matter as unwarranted, the CUPP spokesperson warned him that party politics is different from sports gambling which is his area of specialisation.

He added that leaving his governorship campaign to insult party chieftains because of Ayu, has portrayed Adebutu as a joker.

The statement reads, “It is funny how political neophytes are quick in jumping into the fray to make comments on issues they know little or nothing about.

“The display of crass ignorance was what played out with the statement credited to Adebutu on the leadership crisis rocking the PDP.

“With his shaky governorship ambition in Ogun State, does Adebutu think licking Ayu’s boots is what will save him?

“I urge Adebutu to face his governorship campaigns and avoid sinking politically with Ayu. No party man who wishes that Alhaji Atiku Abubakar wins the next presidential election will encourage Ayu to hang on to power. So, with his outburst, Adebutu has revealed himself as Atiku’s enemy.

“Supporting a sinking party chairman openly, like Adebutu did, only portrayed him as a political gambler. This, clearly, is not good for his political ambition.”

Ugochinyere added that Adebutu could not win a governorship race by insulting people because of Ayu.

He said the most reasonable thing to do was for Adebutu to first secure his governorship ticket before turning into Ayu’s hired mouthpiece.

“I make bold to say that Adebutu does not have the capacity to meddle in Ayu-must-go battle. Let me also warn him that my name and those of Wike, Ortom, and others should not come out of his mouth again.

“Since you have decided to play lotto with your governoship ambition by attacking those opposed to Ayu, do not drag us into such,” Ugochinyere stated.