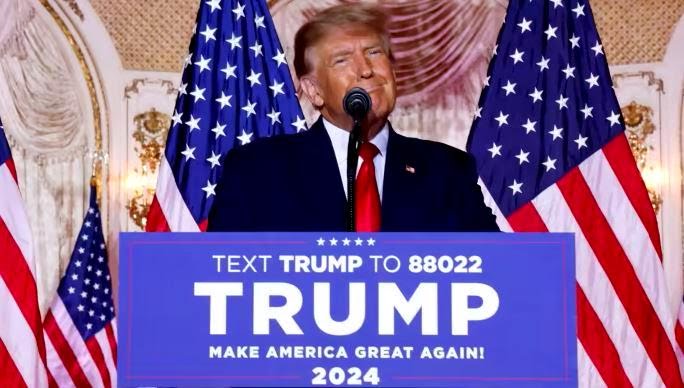 Former US President, Donald Trump on Tuesday night, November 15, announced his third run for the White House, becoming the first Republican to enter the 2024 presidential race.

Trump, 76, declared his candidacy in Palm Beach, Florida, almost two years from the November 2024 national elections and after publicly flirting with a pre-midterm entry over the summer.

Announcing his candidacy in the ballroom at his Mar-a-Lago home in Florida, Mr Trump, 76 said: “America’s comeback starts right now. In order to make America great and glorious again, I am tonight announcing my candidacy for president of the United States.

“This will not be my campaign, this will be our campaign all together. We will again put America first. Are you getting ready? I am too.”

He added: “Our campaign is based on freedom, values, individual responsibility and just plain common sense.

”Trump said his campaign was going to be “about issues” and would “unify people”.

He accused Joe Biden of “leading us to the brink of nuclear war” and added: “Ukraine would never have happened if I was your President.

”Trump said his successor’s withdrawal from Afghanistan was “the most embarrassing moment in the history of our country”.

He said Mr Biden had “destroyed the economy” and brought “hardship and despair”.