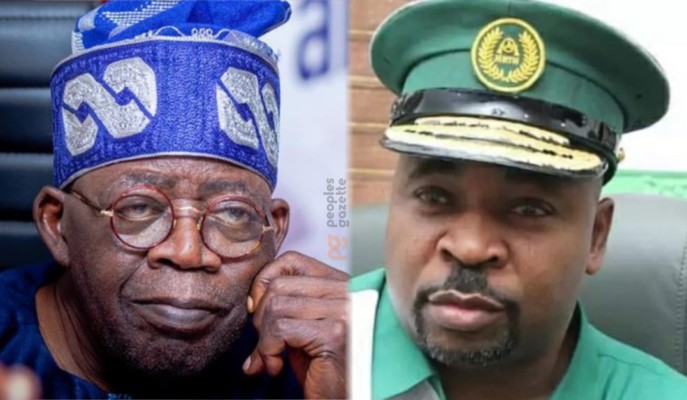 Commercial motorists in Lagos are now being mandated to pay N500 for campaign stickers in donation to Bola Tinubu’s presidential campaign.

The move now reveals a new phase of political recklessness by the presidential candidate of the All Progressives Congress, being witnessed ahead of the 2023 general election.

A video recording of the new development obtained by Peoples Gazette, exposed an officer of the Lagos State Park Management Committee, led by Musiliu Akinsanya, aka MC Oluomo, forcefully pasting the campaign stickers on a resisting motorist.

In the now viral video, the park management officer was seen harassing a motorist who refused to purchase the sticker. “You will have to meet the chairman (MC Oluomo) for questions,” the officer said while struggling with the motorist.

Rinu says that Mr Tinubu’s self-acclaimed political structure is based on “criminality, tyranny and fraud.”

Her tweet read, “If they ask you about structure, this is the structure of criminality, tyranny and fraud they have in order to win elections.”

“It seems that this has actually been happening for months now.”

“You are already oppressed, yet they are forcefully collecting your money to come and further oppress you. Is this the Nigeria you want?

“This is how they plan to capture their “structures”. God help us,” Oduala tweeted.

This is the latest in Mr Tinubu’s gross abuse of political privilege which has continued to unleash economic violence on residents of Nigeria’s commercial capital.

The former Lagos governor has also been severally accused of using his office during his time as governor to create multiple means of systemic extortion through handing over critical revenue collection sectors of the state to consultancy companies in which he has interest.

Informal revenue collection in Lagos still continues to be coordinated by Mr Tinubu’s relatives or staunch loyalists. Market fees are coordinated by his daughter, Folashade Tinubu-Ojo and transport tolls by MC Oluomo, a die-hard loyalist.

Calls and messages sent to the Tinubu Campaign Organisation spokesperson, Dele Alake, seeking his comment on the matter, were unreturned as of the time of filing this report.