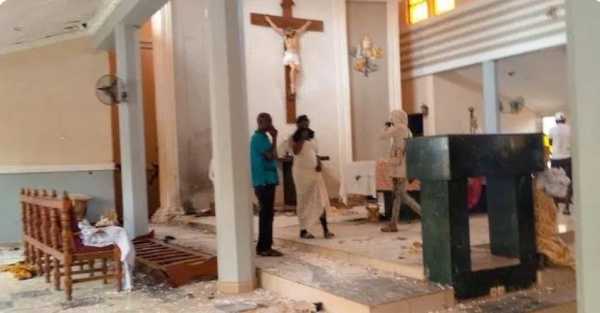 A civil servant and victim of the Owo massacre, Mr Benjamin Awosa has spoken on the traumatic incident which claimed over thirty lives.

Recall that a week ago Naija News reported that suspected Fulani Herdsmen had attacked congregants in a Catholic church in Owo.

Speaking more on the incident, Awosa gave a detailed description of the incident to Daily Trust.

He said: “The mass just ended with the priest saying ‘go in peace, and all of a sudden, we heard a gunshot. A young boy who sells sweets by the Church gate had been shot. People started running helter-skelter. Then, there was an explosion it was difficult to remember.

“About four or five of them started shooting at us. I saw a small boy looking for his parents, he was killed. They didn’t spare anybody. Suddenly, a bullet hit me in the leg, and all the people around me were dead.

“They were all young boys. My wife is also on admissions as she was affected by the explosion. The way they carried out that operation, it was like they were trained for it and their mission was to wipe out everybody. Some strange people have taken over, we don’t understand what is happening anymore.”

Another victim shot close to the breast, Mrs Precious Sunday said it was by the grace of God she survived the attack.

She said: “I was in the Church with my three children, one of them – a four-year-old, was also shot and is receiving treatment at the children’s ward.

“I never believed such a thing can happen in the Church and in a town like Owo which has always been peaceful.”