The popular singer has made a series of posts that appear to be related to the recent saga involving Biodun Fatoyinbo, the Pastor of Commonwealth Of Zion Assembly (COZA), and Nnenna Kalu-Ude, a former choir member.

READ ALSO: We Told Our Children About Their Mum’s Rape Ordeal – Timi Dakolo

Remember how the lady accused the clergyman of being diabolical and mistreating choir members? She also drew the pastor’s wife, Modele, into the story by revealing that she is his accomplice.

Timi Dakolo, whose wife, Busola, had previously accused the pastor of rapping her when she was a teenager, took to his social media pages to make a strong statement in the midst of the scandal.

“But i been tell una, una call me all kinds of names.”

“Truth is truth,break it,drown it, Cover it,blend it,burn it or even paint it.The thing is -Truth will always be truth and it will survive all this it own. Victory is truth realized.

“And just because you are having a hard time believing the truth doesn’t make it a lie.” 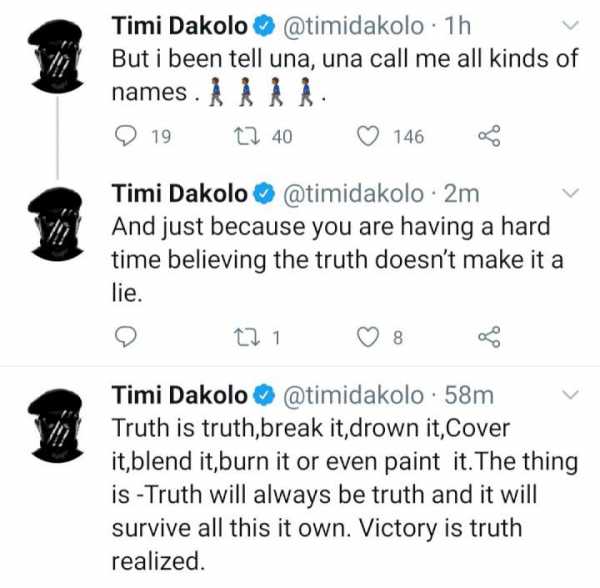