Billionaire businessman and chairman of Forte Oil, Femi Otedola, has once again extended his hand of generosity as he has taken it upon himself to pay the medical expenses of ailing former Nigerian goalkeeper, Peter Fregene. 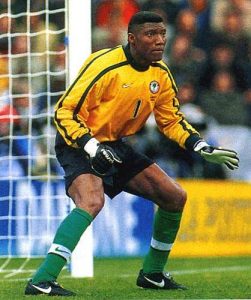 The 72-year-old Fregene who represented Nigeria in the 1968 Olympic games, has been seriously ill in Sapele, Delta state. According to reports, he had been bedridden since 2016, as a result of the undisclosed ailment.

Thanks to news reports, Otedola got to know about the footballer’s ailing condition. He then sent his representatives to Sapele, Delta state where the footballer stays to check on him and he has since given orders that Fregene be airlifted from the airport in Edo state to Lagos state today, Friday, June 14, 2019 where he will receive medical attention at the Reddington hospital located in Ikoyi, Lagos state.

Recall, this same year in April, Femi Otedola donated $50,000 for the medical treatment of ex-footballer and coach, Christian Chukwu who is currently receiving treatment at Wellington Hospital in UK.