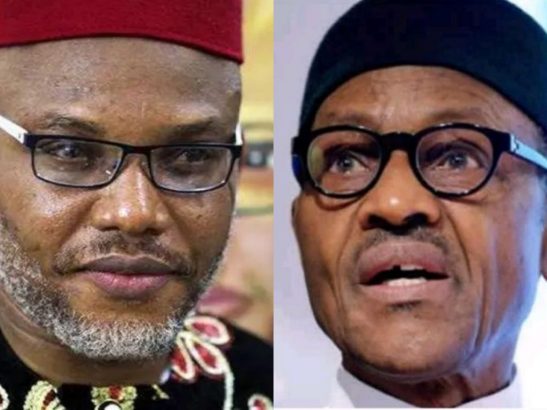 Nnamdi Kanu the leader of IPOB leader, has slammed the FG for honouring MKO Abiola instead of former Head of State, late Gen. Aguyi Ironsi.

Kanu made this known via a live broadcast from London where he clearly slammed the June 12 declaration as Democracy Day which was done in honor of late MKO Abiola, who had won the June 12 annulled election.

Yoruba political class with their media hegemony and the ever treacherous Igbo Efulefus pushed and pushed until the FG of Nigeria declared June 12 a remembrance day to honour MKO Abiola while nobody remembers Aguiyi Ironsi a former Head of state because he’s a Biafran of Igbo extraction.

“They passed a bill today to recognise and honour June 12 because of one man, then turn against IPOB for honouring 6 million victims of genocide and those that fought to save those of us who are alive today. They must be mad and insane. Anybody who fails to sit at home on May 30th deserves to be stoned to death.

“Abiola, a Yoruba man that Hausa Fulani killed will be honoured on June 12 but they are telling us not to honour over 3.5m innocent men, women and children killed. We Biafrans are wiser now. Let us honour our own heroes and heroines. Sit-at-home on 30th May let us show them love and remember their sacrifice.

“This same mindset led us to forget the heroic exploits of our mothers in 1929 of which this year is the 100th anniversary. The manipulative Nigerian media and some Efulefus born beside a refuse pile in Lagos made you to also forget the bravery of our mothers and fathers at the coal mines in Enugu. This was the first resistance against colonialism in Nigeria.