Tinubu Set For Presidential Rally In Lagos On Saturday 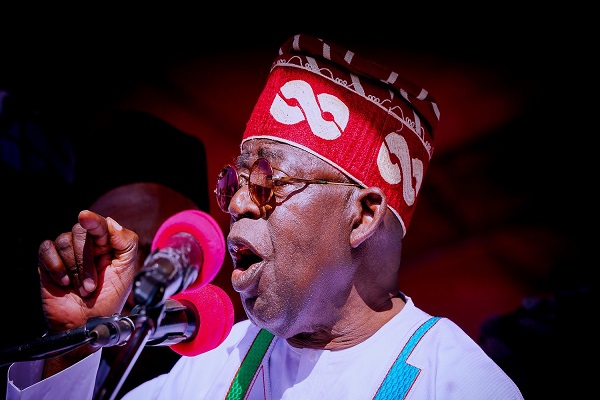 All is set for the presidential rally for the candidate of the All Progressives Congress, Bola Ahmed Tinubu, billed to hold at the Teslim Balogun Stadium, Surulere, Lagos on Saturday.

Speaking on the preparation for the rally at a news conference in Ikeja on Wednesday, the Director General of State Campaign Council, Ganiyu Solomon assured the public of adequate security and a hitch-free presidential campaign.

Solomon, the chairman of the Local Organising Committee assured that the rally will have men of the Nigerian Police Force, Lagos State Traffic Management Authority, LASTMA, officials and other law enforcement agencies to prevent security infractions and traffic disruptions..

He stated that the rally will be a homecoming for Tinubu and that the event holds a promise for mass attendance by party faithful and supporters because of his popularity.

Solomon described the presidential standard- bearer, as the candidate to beat in next year’s general election.

Solomon said: “You may wish to recall that Tinubu excelled as a Senator representing Lagos-West Senatorial District and as the Governor of Lagos State between 1999 and 2007. Therefore, the event is like a homecoming for our leader and mentor who has become a national pride.

Read also: Tinubu Should Be Apologising To Nigerians, Not Campaigning – PDP

Solomon enjoined participants to be of good conduct and display peaceful conduct at the event.

“As a responsible political party, it is imperative to seek the cooperation of the general public as regards the need for temporary diversion of traffic and mass movement of supporters within the vicinity of the rally.” He added

He said the Saturday rally would not be the last because Tinubu would come back for the closing mega rally in Lagos.

National Youth Leader of the party , Dayo Israel, who was present at the brief acknowledged the public interest and expectation, assuring that “a victory for Asiwaju is a victory for Lagos.”

Israel said party leaders from across the states are expected at the rally because Lagos is Tinubu’s base.

He added: “Lagos will set the pace for other states to build upon. It will be a hitch-free exercise.