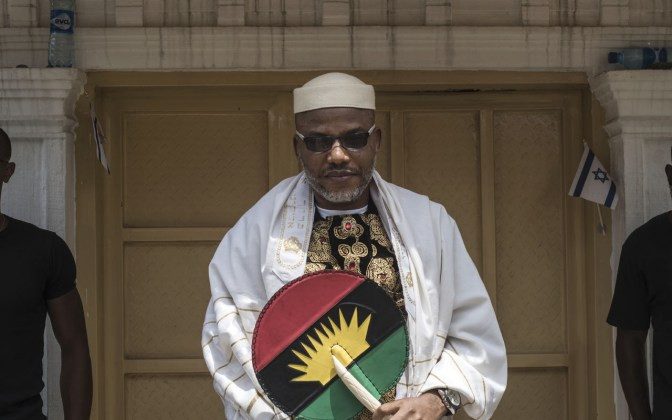 Nnamdi Kanu, leader of the Indigenous People of Biafra (IPOB), has filed a fundamental rights enforcement suit against the Federal Government over his continued detention by the Department of State Services, (DSS).

“By virtue of Section 46(1) of the 1999 Constitution and Order 1 Rule 2(1) of the Fundamental Rights (Enforcement Procedure) Rules, any person who alleges that any of the provisions of Chapter 4 of the constitution to which he is entitled to, has been, is being or is likely to be contravened in any state in relation to him, may apply to the High Court in the State for redress.”

By the suit, Kanu wants a declaration that his continued detention by the government from Oct. 13 till date, is illegal, unlawful, oppressive, unconscionable, and unconstitutional.

“It violates my fundamental rights to dignity of human persons, personal liberty and right to freedom of movement as guaranteed by sections 34, 35, 36, 39, and 41 of the 1999 Constitution.

Kanu is also seeking an order directing the respondents to unconditionally release him from their custody forthwith.

The applicant is also praying for an order restraining the respondents from further interfering with his rights or dealing with him in a manner inimical to his fundamental rights guaranteed by the 1999 Constitution.

In addition, he is seeking compensatory and exemplary damage of N100 billion against the respondents for the violation of his rights.