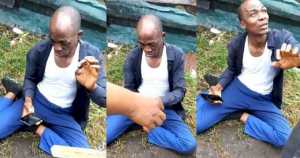 A pastor who allegedly attempted to rape his wife’s sister got caught red-handed in Warri, Delta State.

In a now-viral video, the clergyman could be seen sitting on the ground after being caught, and being approached by others who say they saw him in the act.

READ ALSO: How He Slept With Girl After Delivering Her From ‘Spirit Of Death’ – Pastor Recounts

The unnamed pastor, who heads a branch of a popular Pentecostal church in Udu Road, was also accused of sleeping with his female members.

While being questioned, he was also seen attempting to call an unidentified person. It’s unclear how the pastor was caught but it was gathered that the incident occurred last week.