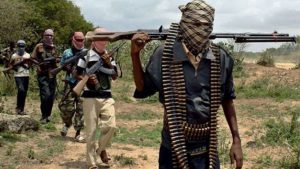 The family of a woman who gave birth while being held captive in Kaduna has requested intervention from the federal and Kaduna state governments after bandits demanded N50 million ransom to free the nursing mother and her two sisters.

The three sisters were abducted on July 17, 2022, in Mando, in Kaduna, when they were caring for their ailing mother at their family home.

Due to the trauma of her children’s kidnapping, their mother, who could walk unassisted before their imprisonment, is now confined to a wheelchair.

Journalists were informed that the oldest sister, who was significantly pregnant when they were abducted, gave birth while they were in captivity without access to human or medical care, as they were kept in severe conditions and forced to eat and drink whatever was available in the bandits’ den.

Malam AbdulWahab Yusuf, the father of the nursing mother and her sisters, recounted the family’s tragedy, saying the bandits had broken into their Mando home at about 1:05 a.m on that terrible day.

“My two daughters used to take care of their mother who is sick. That day their elder sister, who is pregnant came from her husband’s house to look after her mother. The bandits broke into the house, I ran out and jumped the back fence but my three daughters were kidnapped and taken to the forest.”

“They asked for N140 million, but now they have reduced the ransom to N50 million. The family has been adversely affected by the trauma. My wife, who was able to walk unaided before the incident, now uses wheelchair. We just carried out a surgery on her. I have not been myself, I cannot sleep, once it is night I don’t know how my body feels.”

Also speaking, the elder brother of the kidnapped sisters, Kabiru Yusuf said, “since the kidnap, we have been negotiating with them. The bandits initially demanded for N140 million but we pleaded with them that we are poor people, so they reduced it to N100 we pleaded with them further and they reduced it to N50 million last week Saturday and threatened that if we don’t have the N50 million ready, we should not call them again.”

“My sisters lamented to me on Sunday that they were being mistreated, adding that the bandits commander want to leave the camp and may not return until after a while, so we should talk to them. But I told them that we have sold everything we have but what we raised is not tangible and we don’t have anything to sell again they started crying and I broke down weeping too.

“We are appealing to the Federal Government, Kaduna state government charity organisations, philanthropists and well spirited individuals to assist us in securing their release. We don’t want anything to happen to them, if anything happens to them only God knows what effect it would have on our mother, who is now on wheelchair because of their abduction.”

Mohammed Alabi, the husband of the nursing mother and father of three children, including the baby born in captivity, has also made an appeal for help on their behalf to the government, organizations, and well-to-do citizens. This is because the two children at home are pleading for their mother. “My pregnant wife went to her parents’ house to care for her ailing mother, but I later got a phone saying that they had been abducted along with her sisters.

“She gave birth at the kidnappers’ camp on Friday August 2nd, mother and child are not feeling fine, they have not received any medical care. The baby used to cry from night till morning inside the forest. We learnt they were being mistreated, flogged.

Our two children at home used to cry everyday telling me ‘daddy go and bring our mother’ and I don’t know what to tell them. We are all dying emotionally and physically. We are appealing to whoever God will use to secure their release to please help us free them.”