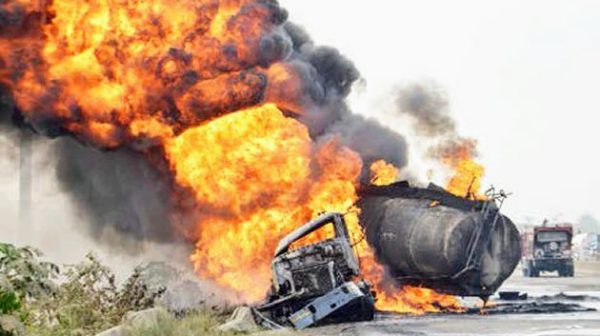 At least three persons were killed on Monday night when a tanker conveying diesel exploded in Lokoja, the Kogi State capital.

The incident, according to reports, occurred some minutes past 8 pm around the Felele axis of the ever-busy Lokoja-Abuja highway when the brake of the fully-loaded tanker failed.

The tanker was said to be descending the sloppy section of the road and as a result of the failure of its brake, the tanker rammed into another truck parked on the roadside.

In an attempt by the driver to halt the vehicle, the apparent force of the collision caused the tanker to burst into flames, leaving three persons burnt beyond recognition.

The incident also left many travellers and motorists on the axis stranded on that part of the road.

The Sector Commander of the Federal Road Safety Corps, Stephen Dawulung, also confirmed the incident to reporters on Tuesday in Lokoja.

He added that two other persons were rescued with burns and taken to the Federal Medical Centre in the state capital for treatment while the bodies of the victims were deposited at the morgue.

“The crash resulted from dangerous driving by the driver who suddenly lost control,” said Dawuling. “The tanker was totally burnt.

“The Dyna pick-up van that was parked by the roadside and two other vehicles were also affected by the fire.”

According to him, FRSC officials deployed at the scene were only able to conduct traffic control to decongest the gridlock that ensued after the inferno had subsided.

The FRSC official cautioned drivers of articulated vehicles, especially those carrying flammable substances to always be careful and drive within the regulated speed limit.

He stressed the need to maintain all vehicle safety protocols such as the use of safety valves to prevent spillages of content in the event of a crash.