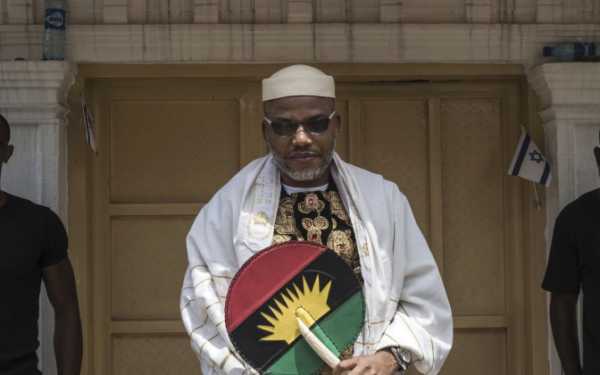 A motion filed by Nnamdi Kanu requesting the Director-General of the Department of States Services (DSS) to give oral evidence on his state of health has been dismissed.

Justice Taiwo Taiwo of the Federal High Court, Abuja dismissed the motion filed by leader of the proscribed Indigenous People of Biafra, IPOB.

Justice Taiwo said that though there were various modes of commencement of action, including fundamental right cases, he said Kanu (applicant) chose to commence his “under the Fundamental Right Enforcement Procedure Rules that stipulates affidavit evidence.”

He ruled that after carefully perusing all the affidavits of the applicant and the respondents before him, he was of the view that there were no irreconcilable conflicts in the affidavits.

The judge, therefore, declined to grant Kanu’s application and was accordingly dismissed.

Taiwo adjourned the matter until April 13 for the hearing of the substantive application.

Recall that Justice Taiwo had, on March 7, fixed today for the ruling on Kanu’s motion, filed by his lawyer, Maxwell Opara.

Opara, in the application, prayed the court to direct the DSS DG and the IPOB leader to appear before it to give oral evidence regarding the health condition of the latter.