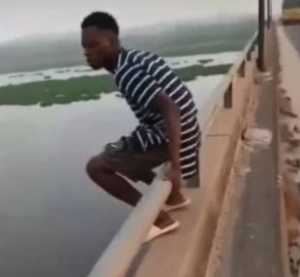 A video has shown the moment a  21-year-old man identified Odunare Olalekan, jumped into a lagoon in Epe Local Government Area of Lagos State, in an attempt to commit suicide on Tuesday, December 14.

The victim, whose body is yet to be recovered, jumped into the lagoon in Epe area around 10am on Tuesday.

Olalekan who is a holder of Ordinary National Diploma (OND) certificate and a worker at Alaro City, a sprawling mega estate along the Lekki-Epe Expressway, was seen in videos shared online sitting on the rails of a bridge before plunging into the waters.

A man filming the scene was heard querying his intention, but Olalekan who looked distressed never responded.

It was also learnt that the man who is presumed dead, left behind a one-year-old baby for his 19-year-old girlfriend.