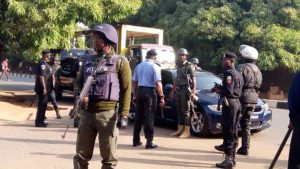 According to PUNCH, the names of the gangs could not be ascertained as of the time of filing this report but residents of the area called for police intervention over rising cult attacks, saying they are living in fear.

It was learnt that the suspected cultist shot indiscriminately shattering the serenity of the Island as residents stayed indoors to avoid being caught in the crossfire.

Representative of Concerned Indigenes of Bonny, Mr. Christopher Pepple, while speaking to newsmen, said hardly a week passes without an incident of cult attacks recorded, even as he accused security agencies for the upsurge in cult-related activities.

“The police authorities in Bonny are not doing enough to protect the lives and property of the people of Bonny,” he stated and expressed fears that the people might not be able to celebrate this year’s Christmas in Bonny LGA if nothing was done to curb the trend.

Reacting to the killings, Secretary of Bonny LGA, Ralph Jamaica, in a statement condemned the incident, saying the council authority would not tolerate such anti-social activities capable of causing a breach of the peace.

The statement read, “The Authority of Bonny Local Government Area wishes to clarify that it has received a briefing on renewed acts of cultism/gangsterism leading to the death of two persons in the course of rival cult clashes.

“It should be strongly noted that the Local Government under the administration of Dame Anengi Barasua will not tolerate by any way or manner, anti-social activities that are inimical to the peace and wellbeing of the people of Bonny LGA.

“Let it be known that the leadership of Bonny Local Government Council is not ignorant of the fact that the Government of Rivers State signed the Anti-Cultism Bill into Law in March 2018.

“The bill proscribed all forms of cultism, prescribes death penalty for any cultist who kills during a cult activity, and life imprisonment for any cultist apprehended.”

While warning landlords and property owners to monitor suspicious movements, Jamaica said, “Anyone arrested in connection) shall face the full wrath of the law, and the government shall ensure that is done in the soonest possible time.

“The protection of life and property is the most important responsibility of the Government, never again shall anyone or group of people be allowed to threaten the peace and wellbeing of the people.”