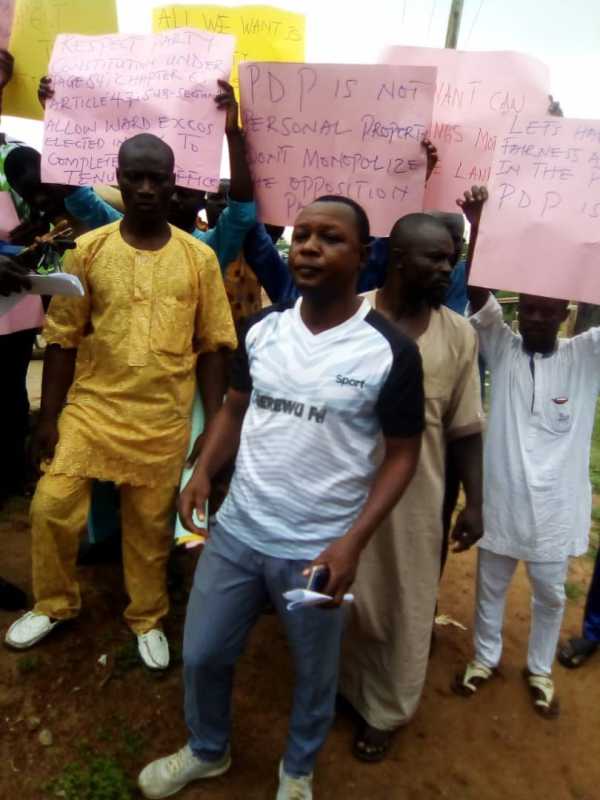 The protesters, mainly from 193 wards across the state, decried the attempt to recognize the factional congress of the Saraki group, ahead of theirs which is the authentic ward congress.

The protesters, made up of different support groups in the party, under the banner of PDP Redemption Group, were seen holding banners and placards while chanting “No to Saraki dominance”.

In the statement issued to reporters after its press conference, the group said it is distancing itself from the impunity which has become the norm in the Political family of the Saraki tendency, which it added, the party gave shelter for protection in 2019, of which the bitter wounds they still nurture.

“The attempts to turn the landlords to tenants in their own house is not only misdirected but to be resisted through all means permissible by the laws of our Party and those of the land,” the statement said.

They blamed the recent woes befalling the party on the inordinate ambitions of a clique working against the interest of majority of the Party members across the 193 wards, stressing that the party cannot watch such people preside over another full blown electoral humiliation again.

“We stand by the outcomes of the ward congress freely held across the 193 wards by the members of our Party.

“We reject the kangaroo arrangements called a factional congress by the Saraki tendency as we urge the National Secretariat of our Party to give primacy to the survival of our Party ahead of individual’s interest.

“We commend our members for their resolute position to defend our Party and avoid it’s final burial by those elements bent on imposing their will to the detriment of the majority, the aggrieved group stated.