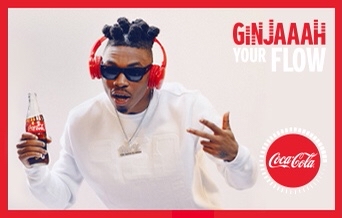 Following the launch of its ‘Ginjaaah Your Flow’ campaign which encourages Nigerian youths to turn slump moments into uplifting ones, Coca-Cola has premiered its music video in Lagos and Abuja.

This comes after the recent announcement of the ‘Ginjaaah Your Flow’ dance challenge led by lyrical sensation, Mayorkun and popular choreographer, Izzy Odigie.

At the premiere, guests had the opportunity to mingle with some of their favourite influencers including Priscilla Ojo, Lord Sky, Josh2Funny among others. Those not present at the event were able to connect with the influencers, sharing exciting conversations on the brand’s Instagram page, through live streaming of the event.

Right after the unveiling of the official music video for Ginjaaah Your Flow, Mayorkun thrilled fans with an energetic performance. It was a Ginjaaah galore till the end.

Once again, we are reminded that nobody knows how to get us Ginjaaah’ed like Coca-Cola.