Man Dies After Accidentally Shooting Himself 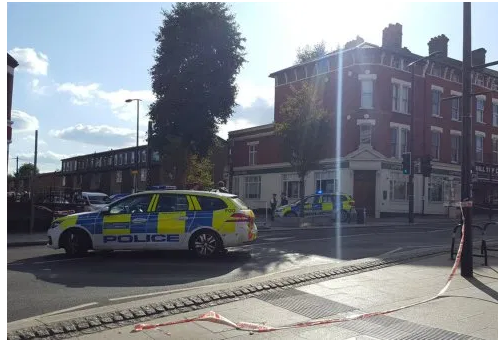 A new report has confirmed the death of a man in London after he accidentally shot himself while trying to gun down someone else.

Gunshots were heard in Sydenham Road in Lewisham at 3.45pm on Sunday before a man, believed to be in his 20s, was found with gunshot wounds by officers who had been called to the scene.

He died at the scene just five minutes later.

A woman, 56, told officers she saw the man trying to shoot someone else before being hit by the bullet himself.

“After it happened, the boy he [tried] to shoot stood there filming him.”

“He’s been there for three hours covered by a sheet. No mum, no dad. It’s really sad.”

A shopkeeper on the nearby high street also said:

“A group of guys were sitting in a car by the bank and a big guy came up to them with a shotgun.”

“They all got out of the car and ran so the guy decided to damage the car with the back of the gun. As he was hitting the windows the gun went off and he shot himself – that’s what we’ve been told.”

Another man said; “We’ve heard three or four different stories – we’ve heard it was a guy on a moped, someone in a car and then that the [victim] did it to himself.”

Ellie Reeves, Labour MP for Lewisham West and Penge, reacting to the news via Twitter wrote; “Shocked and saddened to learn of the fatal shooting in Sydenham this afternoon. My thoughts are with the victim and their family. This violence has no place in our community.”