CEO of Solar Worldwide Realty Inc., Moji Solar-Wilson, has shared a new photo of herself and her wife, Margaret Wilson, a UK-based Nigerian medical practitioner from Cross River State.

Moji Solar-Wilson who comes from Ijero-Ekiti in Ekiti State, tied the knot with her lesbian partner in 2017. Her first child reportedly walked her down the aisle.

The LGBT activist shared the new photo of herself and her wife on her social media handle in honour of Gay Pride month.

According to reports, Moji had alledgedly been married to a man in Nigeria with whom she had children for. Reports claim that that once she got to the United States, she could no longer keep her sexual orientation as a lesbian under wraps and this prompted her to split up with her husband. She was involved in several gay relationships before finally meeting her heartthrob. 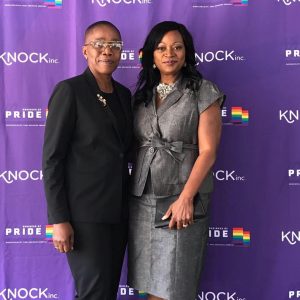