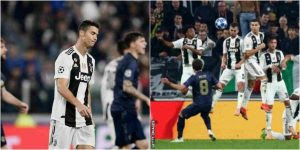 Manchester United came from behind to beat Juventus 2-1 at the Allianz stadium in Italy during their UEFA Champions league fourth group stage match meeting yesterday. They now have seven points from four matches after the win yesterday and sit in second place on their group table.

With Juventus leading by a lone goal in the second half, the Red Devils coach, Jose Mourinho, threw Juan Mata in the frey in place of the ineffective Alexis Sanchez and the Spaniard repayed his boss faith in him with a beautiful well taken free kick in the 84th minute to make the scoreline line 1-1. With the Red Devils going on to win the match by 2 goals to one.

The Spanish midfielder then took to his twitter handle to react to the equalising goal by revealing how happy he is.