Just months after Tekno was called out by veteran group Danfo Drivers for an unauthorized use of their hit Jogodo in a remix of the same title, singer Tiwa Savage is on a warpath with Tekno for the same infringement.

Sometimes last week, American R&B diva Ciara announced a collaboration with the MMMG signed Tekno titled ‘Freak Me’. It was apparent that being aware of the growing African music industry, Ciara tapped on one of the most known voice on the continent, Tekno. The video to the song was released almost simultaneously. However, Tekno was conspicuously missing. In the same vein, unlike Ciara who excitedly shared the artwork for the single, Tekno refrained from doing so- which artiste-turned-Instagram blogger Tunde Ednut pointed out.

It didn’t take fans long to recognize the striking similarities between the new song ‘Freak Me’ and a song on Tiwa Savage’s 2015 album RED titled ‘Before Nko’. 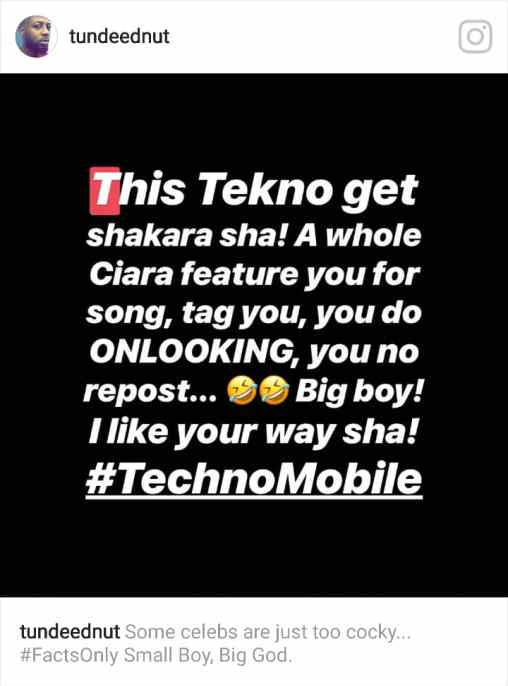 NET  can exclusively confirm that neither Tekno nor Ciara obtained clearance or permission from Tiwa Savage before infringing on her copyright, a move that has left the talented mother of one extremely aggrieved.

A member of Tiwa Savage’s camp who spoke to us exclusively on the condition of anonymity revealed the level of disappointment she has in Tekno, whom she considered a friendly colleague; not in the least because they both are Pepsi ambassadors and know each other well.

‘We were surprised that they went that route. They didn’t even just sample some strings, the beat and lyrics of the hook are basically the same. Tiwa is extremely upset because it seems like a rip off of her sweat.’

Asked if there were any enquiries from the Ubi Franklin led MMMG, the answer was negative. ‘They didn’t ask or inform us before the song was made. As a matter of fact, we reached out to them when we heard the song but they didn’t do us the courtesy of even responding. This is not how to do things. Tekno himself is not sharing links to the song as much as his boss Ubi is. This is wrong‘, our well-placed source said.

He added too that ‘It may not have been in Ciara’s place to know that the song belonged to someone else but the onus was on Tekno as the featured act and producer (who we believe gave the song to her anyway) to inform her.’

On our part, we contacted Ubi Franklin before filing this report. Calls were not answered and text messages sent to him were not replied at the time of publishing this.

Although Tiwa Savage (along with Don Jazzy, his brother DPrince) was listed as one of the composers on streaming sites such as TIDAL, she believes that does not suffice as ‘permission’.

It is the second time this year that Tekno would be accused of song theft. In May, the duo of Mountain Black and Med Melon called him out for appropriating their early 2000’s hit Jogodo. Tekno did not deny the charge but soon after was seen with the singers in an apparent reconciliatory mode.

Last year, he was also criticized for interpolating parts of 50cent’s In Da Club in his Go single.