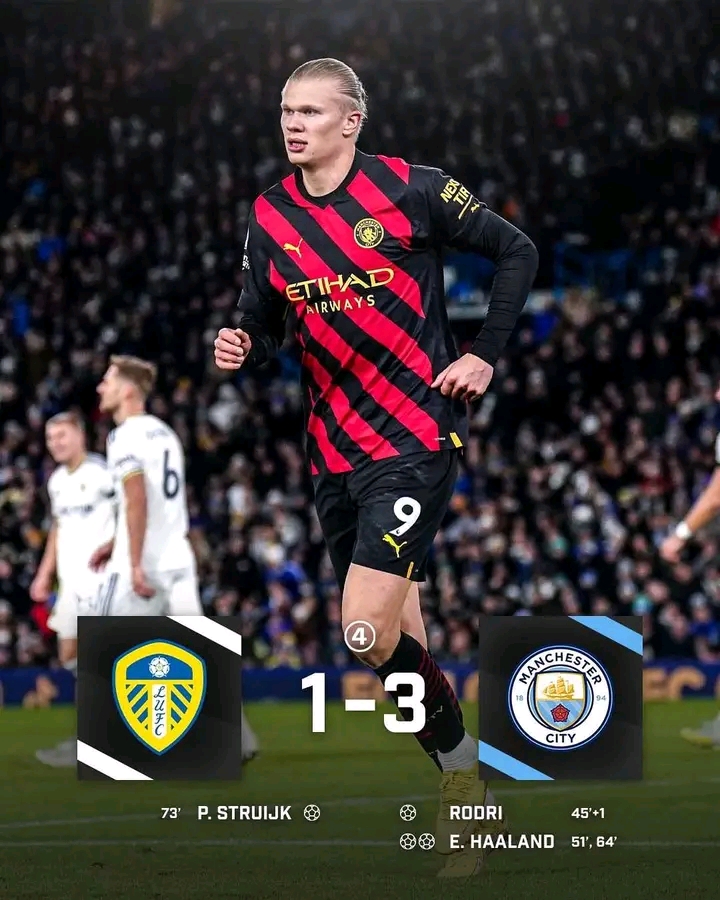 Erling Haaland became the fastest player to reach 20 Premier League goals as Manchester City overcame a stubborn Leeds to reduce Arsenal’s lead at the top of the table to five points.

Frustrated by a disciplined and determined home side and their own profligacy for much of the first half at Elland Road, City snatched the lead just before the break through Rodri’s follow-up finish and then sped into the distance in a one-sided second half.

Having seen a couple of efforts saved early in the game, Haaland – playing in the city of his birth against the side he supports – did not celebrate his goals but showed little mercy in securing them to bring up his impressive tally in just his 14th game of the campaign.

He could not miss for his first, set up in front of an open goal by the unselfish Jack Grealish, who himself had missed a hat-trick of good opportunities in the first 45 minutes.

Grealish was the provider again for Haaland’s second, which he slotted in from close range following a deflection to give Leeds too much of an deficit to overcome.

In keeping with their display, the home side refused to lie down and got a goal back through Pascal Struijk’s header from a corner.

And they could have set up a grandstand finish had Joe Gelhardt’s poked finish not trickled the wrong side of the post.

City, though, secured the win to move back up to second behind the Gunners and two points better off than third-placed Newcastle, both of whom won on Monday.

The relegation battle is no less intense, with Leeds in 15th place on 15 points and one of 11 teams separated by just eight points.

While 16 of his team-mates were competing for the World Cup in Qatar, Haaland was forced to watch on from afar, stewing on Norway’s failure to qualify and readying himself to take it out on the next opponents he faced.

The early signs were that Leeds might get a reprieve – not through any sentimentality towards his hometown club, whom he was reportedly almost joined as a teenager, but more a little competitive rustiness.

Two chances that he has made a habit of gobbling up were spurned, or rather saved by impressive Whites keeper Illan Meslier.

Haaland was not alone. Grealish was especially wasteful, drawing derision from a home crowd already hostile towards him with three misses, all of which a player of his class should convert.

However, after Rodri had broken the deadlock at the end of an incisive break just before half-time, Haaland and Grealish stepped up in emphatic fashion.