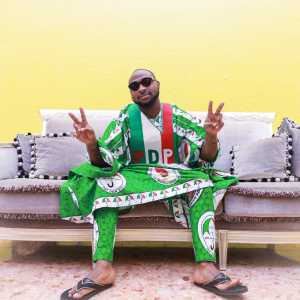 David Adeleke, popularly known as Davido, has criticized Governor Adegboyega Oyetola, the outgoing governor of Osun State over his allegations that there was excessive voting in the state’s July governorship elections.

Davido, the nephew of Ademola Adeleke, the governor-elect of Osun State, accused Oyetola of “spreading lies” and tarnishing his reputation in a tweet.

Davido said this while reacting to reports that his uncle, who won the Osun State governorship election, admitted that there was over-voting in his response to the petition against his victory at the July 16 governorship poll pending before Election Petition Tribunal.

Adeleke had disputed the rumors spreading on social media in a statement on Sunday, adding that his defense was being twisted.

Rasheed Olawale, a spokesman for the governor-elect, said Adeleke in his defense submitted to the Tribunal dismissed Osun State Governor Adegboyega Oyetola’s claim of over-voting in 750 polling places, highlighting the fact that the over-voting was caused by the incomplete data of BVAS based on the unsynchronized BVAS report that was used by the petitioners.

Davido responded by pleading with the INEC to inform Nigerians whether there was excessive voting using its new BVAS Machine.

He tweeted, “You are actually just a bad human being @GboyegaOyetola no other way to put it, spreading lies everywhere destroying your legacy (not like you even have).

“It’s done and dusted @inecnigeria Abeg is there any such thing as over voting with your new BVAS Machine? NOV 27th WE MOVE.” 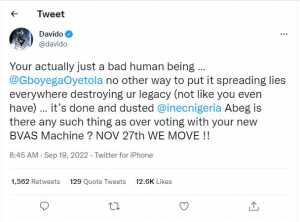