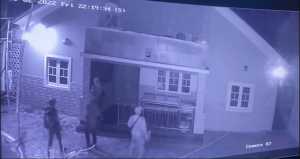 Some suspected armed bandits were caught on CCTV breaking into a house in Funtua, Katsina State on Friday night.

The group of bandits on a kidnapping mission arrived the town around 10 pm, and began breaking into homes and kidnapping residents.

According to information obtained, the kidnappers’ attempt at this particular home was unsuccessful since the entire family was in Abuja.

The bandits entered the house after firing bullets at the door, according to Ahmed Abdulkadir, a friend of the homeowner, but were met by an empty house.

“They broke into the gate around 10:20 p.m. as shown on the CCTV camera clock.

“Fortunately, my friend and his family were out of town and the security guard, sensing danger, had fled to neighboring houses.

“My friend, who is an electrical/electronics engineer and is ICT savvy, had wired his home with CCTV cameras which relayed the footage right into his phone.

“After gaining entrance into the gate, they couldn’t break into the main house, try as they might, including shooting at the door as shown in the footage.

“Frustrated, they had no choice but to abandon their vicious mission. They were said to have vented their anger at Project Quarters, Funtua, where they went away with several people,” Mr. Abdulkadir, a retired zonal director at NBC, wrote on his Facebook page.

He added that the kidnappers had been terrorizing Funtua, Bakori, and neighboring villages.

“For the past two weeks or so, kidnappers have put the people of Funtua, Bakori, and neighboring villages under siege, kidnapping people almost daily.

“The little resistance being put up by the local vigilantes is gradually being whittled away, with security agents seemingly helplessly overwhelmed.

“But the renewed effort put up by Katsina State Government may yet checkmate the bandits with the purchase of new Armoured Personnel Carriers, APCs.

“May Allah comes to our rescue and puts an end to this madness,” he prayed.