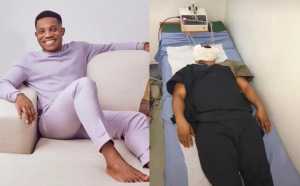 Gospel musician, Tim Godfrey, has testified about how God healed him of paralysis.

The music artiste, who recently got married, posted a picture of himself lying in a hospital bed on his Instagram page.

Tim described how he was taken to the hospital after experiencing excruciating arm agony and severe back discomfort.

The musician was surprised to learn from an MRI that his bones were 20 years older than his actual age.

READ ALSO: “I Have Cried Many Times For My Career” – Tim Godfrey

Along with all of these other intricate things happening to him at the same time, he discovered that his spinal cord disc had displaced.

The singer began to cry as more malicious reports poured in because of this weight, but he found the strength to go home and confess his suffering to God.

Tim Godfrey has been cured as a result of several therapies and fervent prayer.

Tim thought the enemy was plotting to paralyze him, and he thanked God for the gift of healing.

He wrote: “This picture right here was when I was admitted in the hospital. It started with me feeling some pain at my back, then a hellish pain in my arms.

I went for an MRI and the scientists told me that my bones were 20 years older than my age — over 69 years old when I’m in my 40s.

They also told me that my spinal cord disc had shifted and all these other complicated things all happening to me at the same time. I was always in pain. Sometimes I would hold my head to my face and cry so badly.

They told me that I had overstretched my body and a lot of other evil reports. But as the song says when there is a chance for evil, God turns it for good. I went home after some treatments and intensive prayers believing that I am healed and it is so. Right now I’m really grateful to God for the gift of healing.