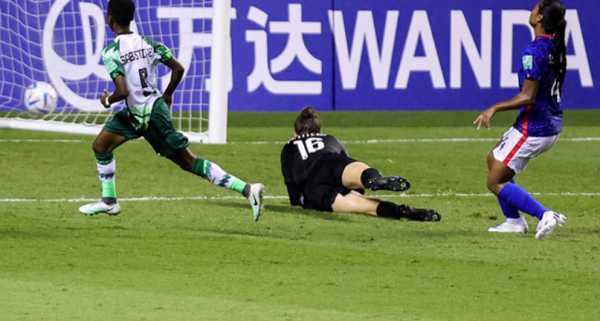 Nigeria’s Falconets defied the heavy rain in San Jose to beat the Little Blues of France in their opening game at the 2022 U-20 Women’s World Cup.

In form, Sabastine Flourish finished off coolly in the 85th minute to hand Nigeria the one-nil victory over a stubborn French side at San Jose, Costa Rica.

Coach Chris Danjuma’s side began the game on a fine note and caused some panic for the Europeans amid the rains which poured harder on the pitch, causing poor visibility for the players and match officials. Centre referee Francia Gonzales was then forced to stop play in the 20th minute due to the weather conditions. The game was, however, restarted after one hour.

Less than ten minutes after the restart, the French side had to head off the ball from the goal as the Falconets continued to surge forward. While no side was able to score in the first half, the second half was an even stiffer competition.

Both teams defended and attacked with resoluteness in the quest for the opening goal. France were to benefit from a goalmouth scramble in the 80th minute. Substitute Jade Nassi’s goal after a corner kick from the European did not, however, count after it was overruled by the Video Assistant Referee (VAR) for a foul on the Nigerian goalkeeper Oyoyo Omini.

As the game flowed from end to end and both sides looking for a late goal, the 2014 runners-up took the lead with just five minutes to normal time. Flourish, who was the highest goalscorer in the African qualification series, finished off a defence-splitting pass from Mercy Idoko to send the ball past goalkeeper Marie-Morgane Sieber.

With the win, a victory over Korea DPR in Nigeria’s second match on Sunday will guarantee the Africans a slot in the quarter-finals of the competition.