Rita Edochie Blasts Those Mocking Odumeje Over His Church Demolition 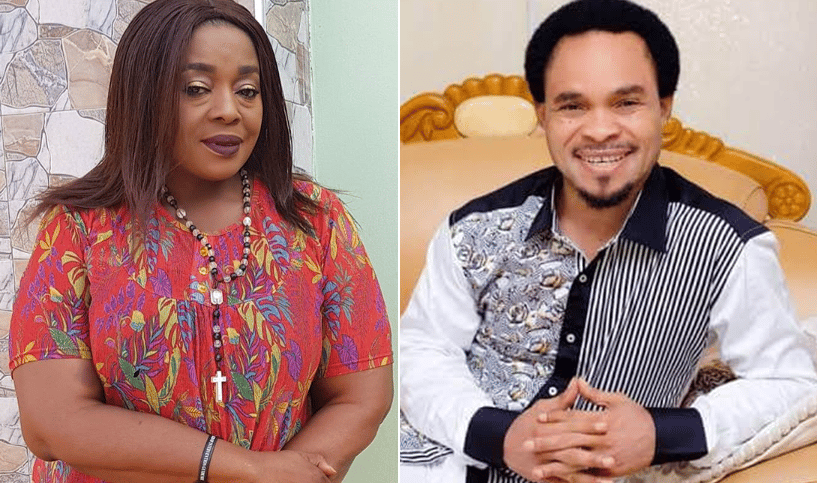 Nollywood actress, Rita Edochie has slammed those mocking the general overseer of the Mountain of Holy Ghost Intervention Deliverance Ministry World Miracle Center, Prophet Chukwuemeka Ohanemere, also known as Odumeje, after he was humiliated by officials of Anambra state government for obstructing the demolition of his church.

Recall that the ministry which was located at no 88B Bida Road, Fegge, Onitsha, and marked by the Anambra State government, was demolished on the 7th July.

According to reports, the church building was sitting on a huge canal and obstructing waterways, prompting the government to order its removal as an illegal building in line with Governor Charles Soludo’s plan to demolish over 200 buildings in Onitsha blocking the drainage linking the River Niger.

Odumeje, in the video that surfaced on social media, was seen being assaulted by government officials who later bundled him out of the church premises.

Reacting to the development, Rita Edochie, via her Instagram, called out the state government for misplaced priorities.

She then went further to slam people mocking the controversial prophet, saying that it could be their turn tomorrow.

“HEY WERE SENT BY THE ANAMBRA STATE GOVERNOR TO BRING DOWN HIS CHURCH.
DID HE ALSO ASKED THEM TO BEAT THE LION HIMSELF ODUMEJEJE ?

“I LAUGH BECAUSE THERE IS SERIOUS WAR NOW IN THE KINGDOM OF DARKNESS BECAUSE OF THIS ACT THAT GOD ALMIGHTY USED SOLUDO SENT MEN TO CREATE SO LET’S SEE.
A GOOD CLAP FOR YOU THANKS.
IT CAN BE YOUR TURN TOMORROW.

“BUT FIRST OF ALL GO TAKE CARE OF SECURITY, ROADS AND CLEANUP ANAMBRA STATE THAT THE DUSTBIN THERE IS FAST KILLING PEOPLE AND NO BODY IS TALKING.

“SECURITY, CLEANLINESS WERE MUCH BETTER DURING THE TIME OF GOVERNOR OBINAO.
TODAY YOU CAN NOT GET TO YOUR HOME TOWN OR CAN YOU BECAUSE YOUR SAFETY IS NOT GARANTEED ?

“NO GOOD ROADS IN AGUATA AND THE ENTIRE ANAMBRA STATE WHERE THEY ARE SUPPOSED TO FOCUS ON BUT THE FIRST THING IS TO DEMOLISH A CHURCH AND YOU ARE HAPPY.
IS THAT CHURCH THE PROBLEM OF ANAMBRA STATE FOR NOW ?

“LET’S SEE WHO LAUGHS LAST AFTER ALL IT’S A QUESTION OF TIME.
IGBO EWEZE.

“CAN YOU BREATH IF SAME THING IS DONE TO AN IMAM ? NO YOU WILL EVEN BE PANICKING BEGGING FOR PEACE TO REIGN.

“LISTEN MAN, YOU CAN NEVER STOP ODUMEJEJE’S SHINE BECAUSE GOD’S GRACE IS UPON HIM.

“LIONS ALL OVER THE WORLD NO FEAR LION IS STILL LION.”