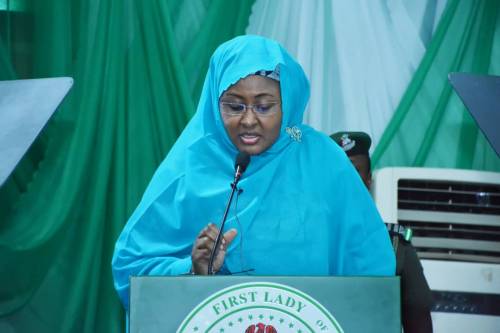 The wife of the President, Aisha Buhari, has urged the All Progressives Congress not to sideline female aspirants on the basis of free or subsidised nomination and expression of interest forms.

This was as she expressed her belief that the party would not relegate women to the backseat.

The Summit was organised by the office of the First Lady in conjunction with the All Progressives Congress and Office of the Women Leader, with support from the International Republican Institute.

Recall that earlier reported that the APC declared free nomination forms for female aspirants. They would however pay for copies of their expression of interest forms.

“To the chairman of our party, governors and party executives, I commend your efforts in supporting women over the years. However, I would like to draw your attention that it is now time to believe in women more and show more solidarity with them.

“It is important to mention the efforts made by our great party towards promoting women participation in politics.

“I appreciate and commend the recent party’s gesture in offering free nomination forms to female aspirants. Honorable Emma Eneukwu representing the chairman of our great party, I don’t want the party to use the free forms as a means of sidelining women at the end of the day.

“I don’t believe in free gifts. But with Dr Beta there as our leader, I believe the APC will not relegate women to the backseat,” she said.