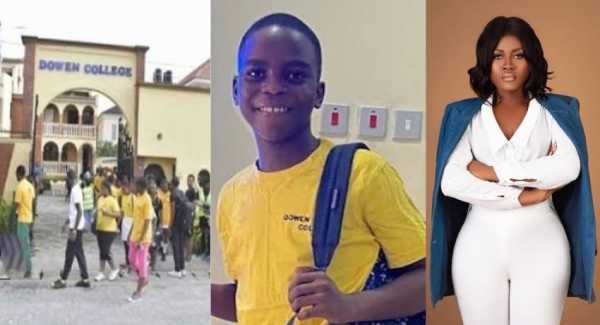 Big brother Naija ‘see gobe’ ex housemate, Alex Asogwa better known as Alex Unusual has asked why Dowen College has been allowed to resume academic operations following the death of one of their students, Sylvester Oromoni who passed away in December, 2021.

In December, the death of 12 year old, Sylvester Oromoni who was a boarding school student of Dowen College had shocked the country.

The family claimed that their son was murdered by his school mates because he refused to join their fraternity. Lagos State Government shut down the school following the news of the death, but it seems the school has been reopened.

Alex Unusual took to her Instagram story to question why the school has been reopened without justice been duly served.

The reality star revealed that she passed in front of the school and noticed they had commenced their academic session.

Alex questioned if late Sylvester’s case has been swept under the carpet. She wrote:

“Wow. I just passed @dowencollegelagos So the school has been reopened or did my eyes just deceive me? Did I just see children in uniforms both parents coming to pick them up? Was Sylvester Oromoni’s case swept under the carpet? Am I missing something?”.