Dowen College: Businesswoman Narrates How She Withdrew Her Son Because Of Bullying 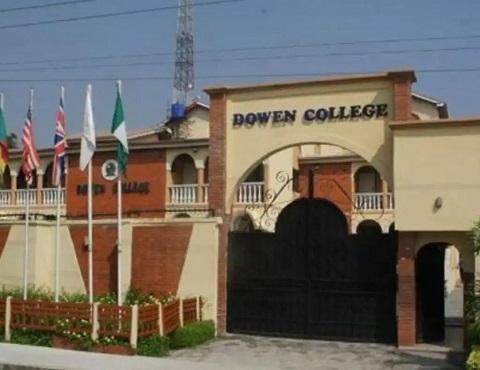 A Lagos-based businesswoman has opened up on the experience her son had at Dowen College.

She shared her story following the sad death of Sylvester Oromoni.

Nikky Ufondu, said she withdrew her son, Henry Ufondu, from Dowen College in 2013 following his repeated bullying by some senior students of the college.

Ufondu said that her son, 10 years old at the time, in Junior Secondary School 1 of the college, was always assaulted and subjected to serve unnecessary punishments whenever he fails to produce whatever the accosting senior students requested.

She disclosed this days after 12-year-old, Sylvester Oromoni. Jnr of Dowen College, Lekki, Lagos, died in a controversial circumstances.

We had reported that the deceased’s cousin, Perry Oromoni, has taken to social media to alleged that some senior pupils of the college beat him up in his hostel room for refusing to join a cult.

But the school denied the claim, stating that the boy complained of pain in his legs and hip following an injury he sustained while playing football.

The Lagos State Government had shut down the school indefinitely to ensure thorough investigation.

Officials of the Lagos State Ministry of Education stormed the school in the early hours of Sunday and sealed the premises.

She said: “Henry was 10 years old when he joined the school for JSS classes in 2013, his provision gets finished fast and would request for another set, and since he was scared to ask me directly, he will rather complain to his school mother of not having provision anymore.

“This case happened countless times. Even when I had just visited him during visiting day and supplied him enough provisions and pocket money, just in less than a week, Henry would be asking for another set of provisions and money.

“I and his father started suspecting him because we knew something was not right. It took us weeks before our son was able to confess to us what he had been doing with his money and provisions.

“Those senior boys have put fears in my son with threats to deal with him should he inform his parents or anybody in the school.

“I wouldn’t have bothered myself about the seizing of provision and pocket money from Henry but the poor boy informed me of what the senior boys have been doing to him. I had to confront all of them.”

“I beat the hell out of all them, one by one, and left my contact for their parents to come and confront me. And that was end of my son in that school”.

“After removing Henry, who is my only son, from the Dowen College, the school management never reached out to me, nor find out why I took my son away from the school, only his teacher who knew of the incident contacted me months after we drew the young man from the school” woman lamented.

“I have to tell the story now maybe it would serve as a lesson to other parents and save several other innocent children currently in same situation since we can no longer trust schools’ management.

“I am taking the blame for not sharing my son’s bullying experience ontime, maybe if I had spoken long ago after I had removed Henry from the college, maybe Sylvester Oromoni Jnr would have been saved.

“I sympathize with the parent of the innocent boy, he did not deserve to suffer, and may God give the family the fortitude to bear his loss”.