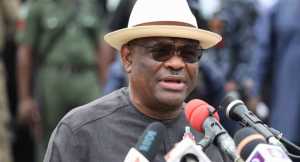 Rivers State Governor, Nyesom Wike has issued a 48-hour ultimatum for the federal government to prosecute the masterminds behind the invasion of Mary Odili’s residence.

Security operatives had on Friday night invaded the house of the supreme court justice based on information that “illegal activities” were going on there.

Attorney-general of the federation (AGF), Abubakar Malami had denied involvement in the raid, while calling for an investigation of the incident.

Speaking during a press conference in Abuja, on Sunday, Wike described Malami’s denial as unsatisfactory.

In a statement by Kelvin Ebiri, special assistant to the governor on media, Wike stated that the federal government will be held accountable if anything sinister happens to Odili and his family.

Also Read: NBA To Meet With Malami, Others Over Raid On Justice Odili’s Residence

“He recalled that on the fateful day the Supreme Court nullified the election victory of the All Progressives Congress (APC) governorship candidate in Bayelsa State, hoodlums suspected to be political thugs invaded the residence of Justice Odili, but the federal government didn’t take any steps to bring the culprits to book,” Ebiri said.

“Governor Wike noted that just recently Dr. Odili had legitimately travelled out of the country for medicals, but on his arrival, his international passport was confiscated for inexplicable reasons by the Immigration Service.

“He said initially the federal government had feigned ignorance of the seizure of Odili’s passport. But, after the former governor approached the court to enforce his fundamental human right, the immigration service eventually came up with spurious excuse to justify their ignoble act.

“Governor Wike described as most worrisome last Friday’s invasion of the residence of Justice Odili by federal government security agencies that claimed they had a warrant issued by a Magistrate Court to search the property.

“The governor noted that though the Attorney General of the Federation and Minister of Justice had denied involvement in the siege on Justice Odili’s residence, the people of Rivers State consider his mere denial as unsatisfactory.

“He charged the Federal Government to within 48 hours apprehend all those involved in the raid of the residence of the Supreme Court justice, the alleged whistle blower and also interrogate the Magistrate who issued the order.”