I’m A ‘Consultant’ To Malami, Man Who Led Raid On Odili’s Home Opens Up 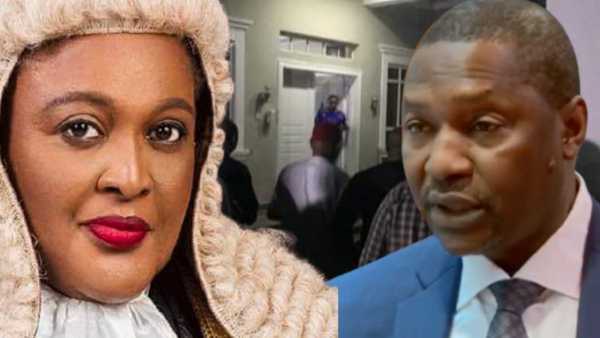 Lawrence Ajojo, one of the suspects arrested over the raid on the residence of Justice Mary Odili, has said he is a consultant to the Attorney-General of the Federation and Minister of Justice, Abubakar Malami, SAN.

Ajojo, who claimed to be a Chief Superintendent of Police, said this when he was paraded by the police in Abuja on Thursday

Armed men had invaded the Abuja residence of the judge on October 29, 2021.

The incident had sparked an outrage. Some persons had linked it to Malami who distanced himself from the invasion.

Speaking with reporters when he was paraded, Ajojo said Malami did not authorise the raid.

“I am not an officer of the Nigeria Police but a consultant for the AGF; he did not send us to raid Mrs Odili’s house,” he said.

However, Malami denied the claim of Ajojo, saying the suspect is not among his consultants.

In a statement Umar Jibrilu Gwandu, his media aide, issued on his behalf, Malami said detractors might be at work.

“The Inspector-General of Police (IGP) ordered a comprehensive investigation into the incident,” he said.

“Earlier on, the Attorney-General of the Federation (AGF) and Minister of Justice had also submitted a written petition into the office of the IGP, requesting a robust and discreet investigation into the matter, with the aim of unravelling the identities of the persons involved, their motives, and perhaps, the authorities, if any, behind them.”