US Senator, Bernie Sanders was slammed by the world’s richest man, Elon Musk after he insisted that the top 1% should pay more taxes.

Elon Musk made a snarky tweet of “forgetting” the 80-year-old senator is “still alive”, in response to his comment about taxing the “extremely wealthy.”

Sanders who unsuccessfully sought the Democratic Party presidential nomination in 2016 and 2020, on Saturday tweeted that “we must demand that the extremely wealthy pay their fair share.”

Musk, whose personal networth is estimated at around $271 billion, tweeted “I keep forgetting that you’re still alive.”  Following up, the world’s richest man added, “Want me to sell more stock, Bernie? Just say the word…” 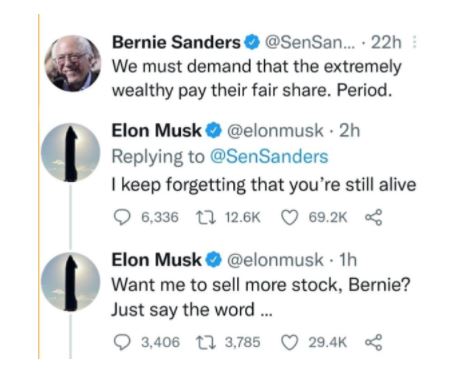 Musk and Sanders have sparred previously, with the Senator telling the tech billionaire in March to “focus on Earth” instead of aiming his vast wealth at interplanetary travel.

Democrats have put forward a proposal to tax billionaires as a way to fund President Joe Biden’s social spending plans.

Musk sold roughly $6.9 billion worth of Tesla stocks last week in one of the largest-ever stock disposals by a chief executive over a several-day period. According to a regulatory filing, the Tesla CEO reported selling 1.2 million shares on November 12, worth more than $1.2 billion, reports The Wall Street Journal.

Those sales came on top of more than $5.6 billion worth of stock sales last week.  Musk hit the big time after selling PayPal which he co-founded  for $1.5billion in 2002. The South Africa-born entrepreneur used his $100million share of the funds to set up various companies, including SpaceX.

The company now flies dozens of rockets a year carrying cargo to the International Space Station and placing satellites into orbit.