Uzodinma Hints At Negotiation With IPOB 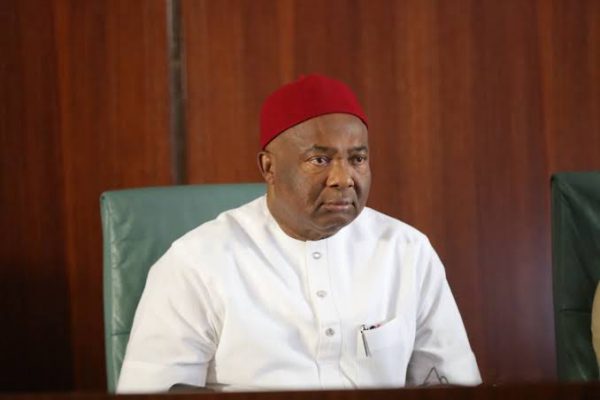 Governor Hope Uzodimma of Imo State has hinted at the possibility of reaching out to the secessionists for talks in order to find solutions to the insecurity in his state.

The governor gave the hint after a meeting with President Muhammadu Buhari at the Presidential Villa, Abuja, on Wednesday.

Uzodimma, however, refused to give details of the kind of discussions being held and the personalities involved.

The governor, while reacting to a question on whether there was any negotiation with the leadership of the outlawed Indigenous People of Biafra (IPOB), said: “The management of crime can be likened to the relationship between husband and wife. It’s not everything they do to keep peace that are discussed at the sitting room.

“Discussion in the bedroom produces better result than the one in the living room. Take it. I think I’ve spoken.”

Uzodimma, who said the sit-at-home order by IPOB has been politicised, stressed that the opposition raised false alarm about people being killed just to cause confusion.

He said: “The sit-at-home order is also being politicised because those issuing the order are faceless. We’ve not seen either through newspapers or through broadcast order directing people to sit at home.

“Rather, what we know that is happening is this paparazzi mentality of trying to put fear into our people and make innocent people vulnerable.

“As I speak to you, the sit-at-home order is not being obeyed in Imo state.”

The governor said the people had been going about their normal businesses apart from last Monday when there was restriction of movement as a result of the Izombe killings in the state.

According to him, “So, I think we need to support the uninformed so that they don’t out of fear commit suicide.

“So, the truth of the matter is that we have security challenges, we had misunderstanding, disagreement, but we are able to also do a lot to bring these things to barest minimum.

“So, the security situation in Imo state is relatively ok and people are going about their businesses.

“The only regret is that we have invested a lot of money trying to manage insecurity which of course was not expected.”

The governor said he was at the presidential villa to thank Buhari for his recent visit to the state where he commissioned some projects implemented by the present administration.