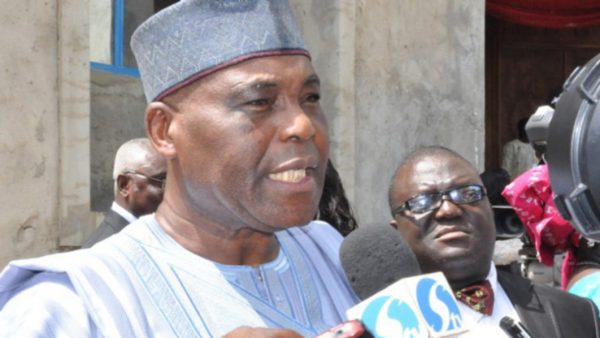 The Chief Judge of the Federal High Court, Justice John Tsoho has ordered the Economic and Financial Crimes Commission, EFCC, to remove the founder of the African Independent Television AIT, Chief Raymond Dokpesi from its watch list.

Justice Tsoho held that there was no justification for the anti-graft agency to continue to keep Dokpesi on the watchlist since there is no criminal charges or allegations pending against him.

Ruling in an application filed and argued by his counsel, Mr Kanu Agabi, SAN, the Chief Judge said that keeping Dokpesi on the watch list will amount to disobedience to the Court of Appeal judgment which in April this year quashed the N2.1B money laundering charges against him.

The Court of Appeal sitting in Abuja had on April 1, this year dismissed the N2.1 billion naira money laundering charges filed against Dokpesi by the EFCC.

The court upheld the no-case submission filed by Dokpesi and DAAR Communications in the seven-count criminal charge.

In the judgment, Justice Elfreda Oyebisi Williams-Dawodu had held that the anti-graft agency, the EFCC failed to establish a prima facie case against Mr. Dokpesi in the charges.

The appellate court had held that the ingredients of the offences were not provided by the prosecution as required by law.

The court had agreed with counsel to the appellant, Kanu Agabi that being a predicate offence, the ingredients of the offences against his client must be clearly provided, adding that it is clear that none of the offences was established in line with provisions of the Nigerian laws.

The court had further held that EFCC failed to prove that the N2.1 billion allegedly received by the appellant as payment was a proceed of breach of trust.

A federal high court in Abuja had in November 2018 dismissed the no-case submission filed Dokpesi on the grounds that a prima facie had been established against him by the EFCC in the alleged N2.1B money laundering.

Justice William-Dowodu in a unanimous judgment on April 1, 2021, held that there was nothing in the evidence of the 14 witnesses called by EFCC to persuade the court to compel the appellant to enter a defence in the charges where ingredients of the offence were not provided.