‘My Husband Is A Fraudster’, Ogun Monarch’s Wife Petitions IGP 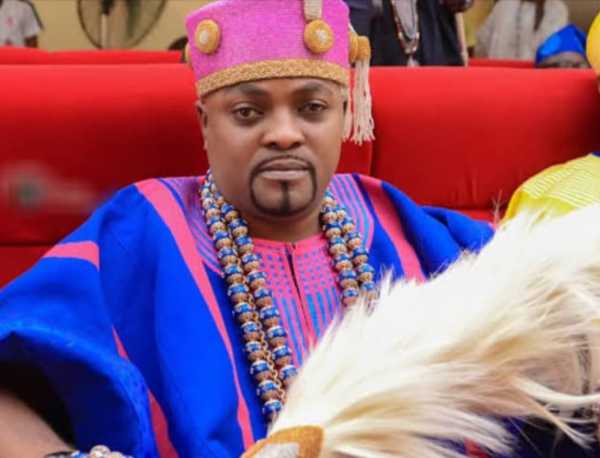 Halima Oniru, estranged wife of the Olu of Orile-Kemta in Odeda Local Government Area of Ogun State, Oba Adetokunbo Tejuoso, has accused the monarch of allegedly obtaining money from her under false pretense.

The woman had earlier petitioned the Inspector General of Police through her counsel, J. S Agada & Co., accusing the traditional ruler of fraudulently coming up with many business plans with an intention to swindle her company, Haleems Integrated Services Limited.

Oniru alleged that Oba Tejuoso had borrowed up to N150m from her on pretence of “pursuing a chieftaincy title in Ogun state.”

She alleged that the monarch had at one time presented to her, forged receipts of some of the transactions so as to defraud her of a huge sum of money.

“In the guise of doing certain kind of business, he continued to place incessant/continuous demand for monies of my business running into hundreds of millions.”

“We finally came together and were co-habiting as husband and wife. In the course of our being together, I got to know about these other sides of his fraudulent and numerous nefarious activities.

“As a result, I confronted him on same and as a result, he started beating and attempted killing me at any slighted opportunity and he finally pushed me out of the house without allowing me to carry any of my belongings from the house,” she said.

In a swift reaction, Oba Tejuoso debunked all the allegations, saying the woman lied against him.

The Oba, who confirmed being aware of the petition, said the money he was owing Oniru was not up to N150million.

The monarch delved into the origin of the crisis between them, denying ever hitting the woman.

“I wouldn’t want to say anything negative about her. I never beat Halima, she fell down in my compound inside the gutter and she had bruises on her leg, but she printed that picture to show the police that I was the one that beat her. If that statement is a lie, let the God of heaven crush my life. But if it is not a lie, let God spare my life and anybody that lied, let the wrath of heaven come upon the person,” he said.