BBNaija Whitemoney In ‘King Of Boys’ 2? Kemi Adetiba produced the latest series of “King of Boys” on Netflix, which has got positive reviews from critics.

She asked, via her verified Twitter handle, @kemiadetiba, “Whitemoney in KOB2?” 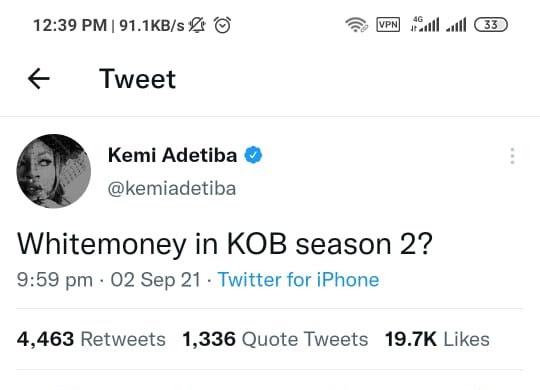 Accolades were heaped the direction, cinematography, action sequences and performances in the series.

At the start of BBNaija, the filmmaker took to her social media page to ask her fans which BBNaija Housemates she should look out for.

Many fans were rooting for their faves. But it looks like her eyes are settling for Whitemoney because she asked who should be in KOB2; Whitemoney?

Whitemoney has proven to be a multi-talented all round entertainer in Biggie’s House with his versatility in music and drama, a generally exuding a likeable confidence.