Insecurity: Fish Out Enemies Of Peace, Buhari Appeals To Nigerians 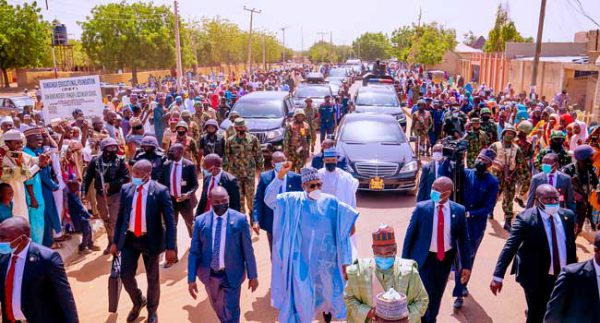 President Muhammadu Buhari has called on Nigerians to fish out those threatening Nigeria’s peace.

The President made the call on Tuesday in his country home in Daura, Katsina State while receiving members of the National Youth Service Corps (NYSC) who paid him a courtesy visit.

“There is insecurity because there are evil people who live in our midst. Communities must fish them out so that we will bring peace to all parts of the country,” President Buhari said through his spokesman, Garba Shehu.

He also cautioned Nigerians in diaspora against disparaging the image of the country abroad, saying there is nothing to gain doing so.

While noting that other foreigners cannot tarnish the image of their country but serve as ambassadors, President Buhari advised the citizens to take a cue from this and project the country’s image in a positive way.

“Why do we go out and tell the worst stories of our own country? I think that Nigerians have to change. If we don’t love this country and promote it nobody will do it for us,” he added.

The presidential spokesman also acknowledged that the unshakable support President Buhari enjoys not only in his hometown but also across the country, noting that it is enough for the opposition to admit that the president matters a lot from the ruling party and Nigerians in general.

He said Nigerians are looking up to President Buhari’s leadership to continue with his legacies in the delivery of infrastructural projects in the country.

Shehu added, “The masses will never abandon President Buhari’s leadership. I assure you that in 2023.

“The masses will be waiting for the President to show the way in courtesy of what he has been building for the country in terms of infrastructure and well-being of young people in the country. Nobody will take the risk by inviting another party to come and take over in 2023.”