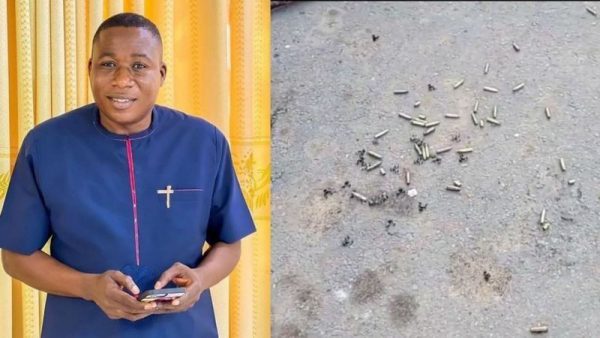 The Department of State Services (DSS) claims men suspected to be guards of Sunday Igboho engaged operatives of the agency in a gun battle during a raid on the home of the Yoruba Nation agitator in Ibadan on Thursday morning.

This is according to the DSS spokesman, Peter Afunanya, who stated this during a press conference on Thursday following the arrest of 13 of Igboho’s armed men by a team of joint security operatives.

The raid, according to Afunanya, followed intelligence that Igboho was stockpiling arms to cause chaos within the southwest region.

“On approach to his residence, the team came under heavy gun attack by nine men suspected to be Igboho’s guards. Six were armed with AK-47 guns and three others with pump-action rifles,” the DSS spokesman said.

“In the course of the exchange, two of the armed men were gunned down, while the rest were subdued and arrested. Only one operative, who was shot by the assailants in his right hand, sustained injury. He has, however, received medical attention and is very stable.

“The gun duel, which lasted an hour, offered Igboho the chance to escape. Sunday Adeyemo, aka Sunday Igboho, is now on the run.”

Igboho was also said to have escaped during the gun battle and is currently on the run, with security operatives calling on him to turn himself in or be tracked down.

The 13 suspected armed agitators that were arrested consist of 12 males and 1 female. A large cache of arms and ammunition was also recovered by the operatives.

Igboho rose to prominence earlier in the year after he issued a quit notice to herders in Oyo State accused of crimes.

The raid comes less than a week after the arrest of prominent pro-Biafran independence leader Nnamdi Kanu.

The leader of the Indigenous People of Biafra (IPOB) group, which supports the secession of the south-east of Nigeria, Kanu was arrested abroad after four years on the run and brought to Nigeria, where he will go on trial for “terrorism” this month.