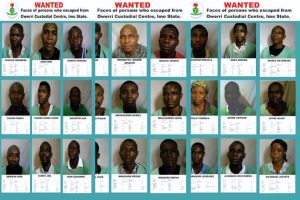 The Nigeria Correctional Centre has released additional names and pictures of inmates who fled from the Imo Custodial centre.

Recall that some gunmen had on April 5 attacked the correctional facility and the police headquarters in the state.

The Nigeria Correctional Centre later put the figure of inmates who fled the facility at 1,844.

In a series of tweets on Friday, the correctional authorities released pictures of scores of male and female inmates who have been declared wanted.