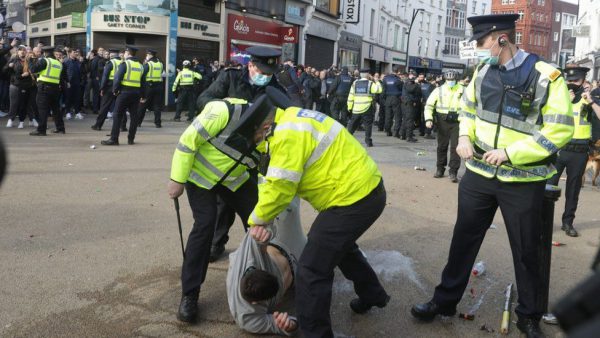 Police in London Saturday said they arrested five people, and eight officers were injured, after disorder at large-scale protests against England’s remaining coronavirus restrictions, the mandatory use of masks and possible introduction of so-called vaccine passports.

Demonstrators had gathered early afternoon and marched along several major arteries, including the main shopping district Oxford Street, with videos and photos showing thousands in attendance.

Hundreds then rallied in Hyde Park later following the march, an AFP reporter said, where “small pockets of disorder” broke out, according to London’s Metropolitan Police Service.

“Eight officers were injured as they worked to disperse crowds in Hyde Park this evening,” it said, adding that missiles including bottles were thrown.

“Two officers were taken to hospital. Thankfully, they are not believed to be seriously injured.

“Five people were arrested for offences including assault on police and are now in custody.”