Nollywood actor and movie producer, Yomi Black, has stated that he thinks he understands why colleague, Etinosa Idemudia, would want to disappoint religion.

Speaking via his Instagram page, he said she has probably been disappointed in the past by religion and she is only reacting to the disappointment.

Read Also: I Was Able To Use Bible As Ashtray Because I Have God’s Backing On It: Etinosa

Yomi Black made the comment after the actress said she can mess up the Quran in two seconds after using the Bible as an ashtray for her smoke.

I think I understand why she would want to disrespect religion.
She is reacting to her disappointments. Most of us have been disappointed by religion, but fear will not allow us to react or vent.
We must understand that people react differently, even though she has a right to her opinion and I never encourage fear, but this time I truly fear for her because of the fanatics among us.
In the future, many will refer to these times as the change period.
To be honest, religion is on its way out. 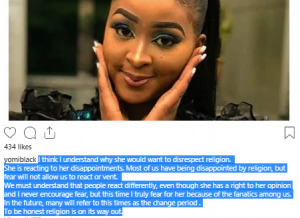