A social media user identified as Charles Mallam-Obi has celebrated his friend, Akpoghene Edeno, who was called to the Nigeria bar after spending 12 years in prison for an offence he didn’t commit.

According to the friend, he wrote WAEC during his time in prison and passed. As soon as he was released in 2012, he proceeded to the University of Benin where he studied law.

He has now been called to the Nigerian bar and as such qualified to practice. Inspiring isn’t it???

See what he posted below: 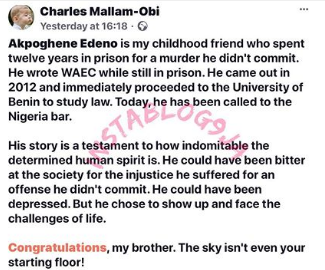