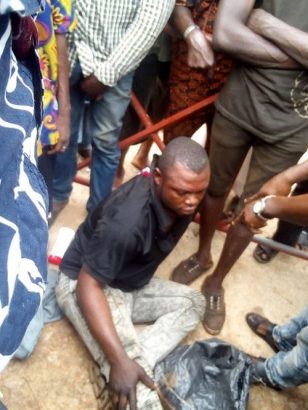 The Ondo state police command has arrested a Man identified as Francis Joseph, 43 for defiling the 12-year-old daughter of his friend in the Lugbogi area of Ondo in Ondo West Local Government Area of Ondo state.

Reports have it that Joseph who is married to four wives and has nine children raped the child and warned her not to disclose what he had with her or she would die mysteriously.

A family source who spoke with Tribune said the little girl kept quiet about the ordeal until she began to bleed at night.

“the 12-year-old girl was rushed to the hospital, bleeding profusely from the private part having been defiled and sexually abused, she is still in the hospital till now. “Her parent reported the incident at the Enuowa police station but to the chagrin of all neighbours, Joseph had left his home before dawn before the arrival of the policemen”

The source went on to state that Joseph was arrested at a park in Ondo town on Thursday as he was trying to board a bus to Lagos.

Upon interrogation, Joseph denied defiling the young girl. He claimed the people of the community conspired against him but gave no reason for wanting to run away from the community.

Report also has it that the family of the suspect had been pleading with the victim’s family to settle the matter amicably but the victim’s parents will hear none of it.

The State Ministry of Women affairs has now waded into the matter to ensure justice for the victim who is currently hospitalised.

Mr Femi Joseph, the State Police Public Relations Officer (PPRO), confirming the incident said the case had been transferred to the State police headquarters in Akure, the state capital and that the suspect will be charged to court after completing its investigation.