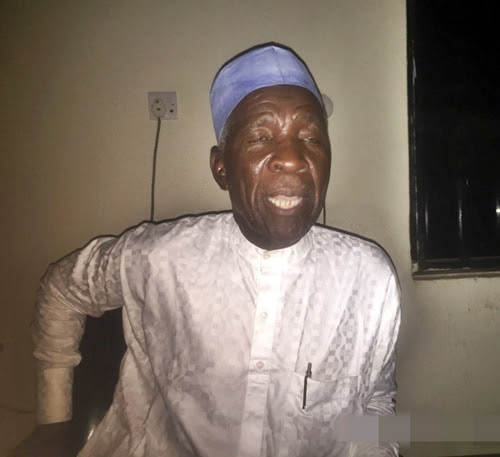 Buba Galadima, an elder statesman and spokesperson of Atiku Abubakar, Peoples Democratic Party, PDP, presidential candidate for 2019 election, has earned himself some mockery after appeared on national TV wearing an All Progressives Congress, APC branded shirt.

Galadima, who has been an ally  of President Muhammadu Buhari right from his days in CPC, recently noted that the president has zero integrity.

After dumping the APC last year to form a faction of the party, which is known as the Reformed APC, Galadima never misses an opportunity to wash Buhari’s dirty linen in public.

However, Galadima earned himself some shots from supporters of the president his Twitter on Friday, after he appeared on Arise TV, wearing an APC branded shirt.

Buba Galadima….one of the spokesperson of @atiku appeared on National TV in this T-shirt today….

This is Buba Galadima

This is him on AriseTv this morning

This is how confused he is
Defending PDP and wearing an Apc branded shirt.

My Advice: Don't Do Drugs pic.twitter.com/hnTeKETYGk

May the camp of our enemies forever be in confusion!.Buba Galadima on Arise TV this morning speaking for Atiku(PDP) in APC crested shirt..Ise aaye ni!

May the camp of our enemies forever be in confusion!.Buba Galadima on Arise TV this morning speaking for Atiku(PDP) in APC crested shirt..Ise aaye ni!