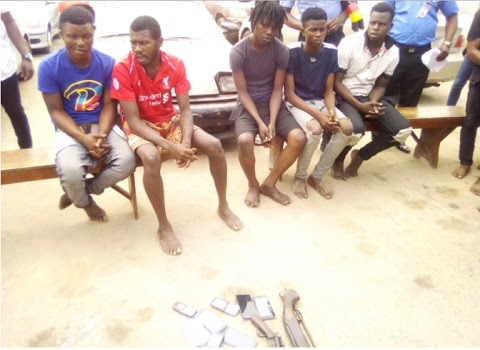 The Lagos State Police Command has arrested some hoodlums for conspiracy, unlawful society and unlawful possession of firearms.The suspects who are suspected cultists are 19-year old Vincent Ameh and 27-year old Julius Matthew.

The Lagos State Commissioner of Police while addressing journalists about the suspects said that on the 20th December, 2018, at about 1800hrs , the Command received information from members of the public that some members of an unlawful society were grouping at Igando Bus Stop in readiness to attack a rival cult group.

The operatives of the Command and that of FSARS based in Igando after receiving the information immediately mobilized to the scene and arrested the suspects.

The items recovered from them included one locally made cut-to size gun, three live cartridges, a T-Shirt with an inscription Vikings Nons Men and a cutlass.

The suspects will be charged to court at the conclusion of investigation. Paraded alongside were hoodlums who were arrested on 2nd January, 2019, for armed robbery and dispossessing motorists of their valuables along Ajegunle area of Alakuko in Lagos State.

On receipt of information, operatives from Alakuko Police Station mobilized to the scene. However, on sighting the policemen, the armed robbers ran in different directions to avoid being arrested but were chased and arrested.

Some items recovered from them included cutlass and daggers.

The suspects have confessed committing the crime and will be charged to court at the conclusion of investigations.

In a similar situation, one 38-year old, Faruba Idris, was caught in Ejigbo area of Lagos State robbing motorists. The suspect was immediately searched and a cut-to-size locally made gun with 2 cartridges were recovered from him. He will also be charged to court at the conclusion of investigation.