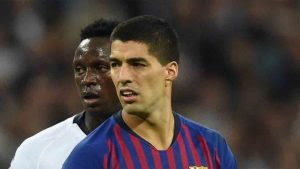 Uruguay international, Luis Suarez, was uncharacteristically poor yesterday in their match against Valencia at the Mestalla stadium.  He struggled to influence proceedings in the final third and could not even complete a single take on.

He also missed several goal scoring chances which ultimately made them unable to take the maximum three points home.

The were held 1-1 yesterday by Valencia in the domestic league. With the draw yesterday, they are now without a win in their last 4 LaLiga matches.

As a result of the Uruguayan’s poor display yesterday, Barcelona fans have taken to social media to lash at him.

Does Suarez offer this club anything but dummies and a friend for Messi? Genuine question

At this point I'm just so so tired of Luis Suarez.. Like who else saw those multiple mis kicks from him.. Which kin nonsense be this??

If Suarez plays this bad and never gets subbed off,he'll never improve and neither will Munir improve. I'm so happy for Paco Alcacer

This Barcelona squad is weak without Messi. Suarez attacking prowl is especially blunt!