Nigerian boy, Nonso escapes deportation after his classmates campaign for him

A young Nigerian boy named, Nonso Muojeke has narrowly escaped deportation after his classmates mounted a campaign against his deportation. 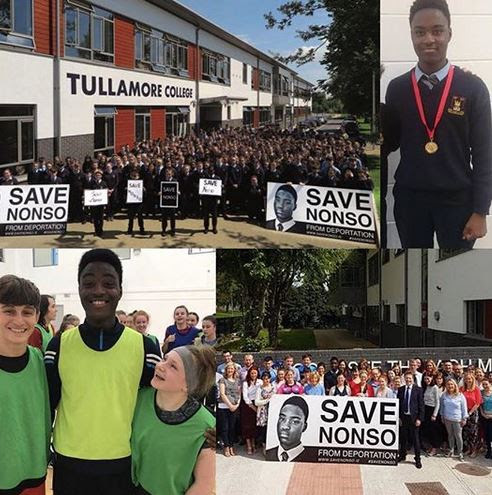 Students and teachers at Nonso’s school, Tullamore College, had protested outside Leinster House, and presented a petition to Minister for Justice Charlie Flanagan in an attempt to stop the deportation order, which was issued last June.

Minister Flanagan has confirmed that the family has been granted leave to remain. Nonso was two-years-old when he arrived in Ireland from Nigeria, with his mother and his older brother, after his father died in 2006.

The family applied for asylum, but their application was turned down and a deportation order was issued. Nonso’s supporters argued that the deportation would be unjust since he had spent almost his entire life in Ireland.

The petition to stop his deportation was signed by 22,000 people. Speaking through an intermediary the Muojeke family said it was “overwhelmed by the news” and appealed for privacy at this time.