A housewife, Mrs. Deborah Okafor, proved to her male neighbour, Mr. Adeboye Adetoyinbo, that he was actually a lazy man as she had claimed by beating him publicly in the presence of other tenants in their compound in Ijegun area of Lagos where both Mrs. Okafor and Mr. Adetoyinbo reside with their families. 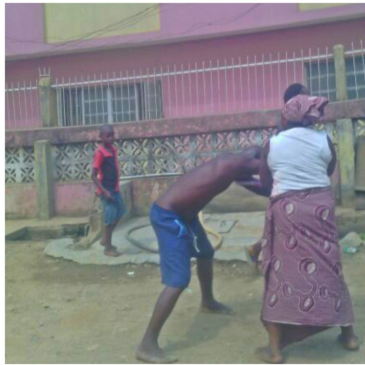 The victim was brutally injured on his face and he ran to the police at Isheri Oshun Division to report the assault on him. Hence, Mrs. Okafor was arrested and detained at the police station over the alleged assault on him.

What would have made Mrs.Okafor to have thoroughly beaten Adetoyinbo was not clear even to their neighbours who said that they the duo had been quarrelling over an undisclosed matter.

It was gathered that Adetoyinbo claimed that he had been married to four wives but none of them was living with him. On the other hand, Mrs. Okafor had a husband who is not always around because of his job as a company driver that travels a lot across the country.

According to Adetoyinbo, he engaged the services of a labourer to clear some weeds in the compound when the suspect started abusing and telling him that he was such a lazy and poor man who only ate Agege bread and had no strength to work.

In reaction, he told her that she was barren and was only able to have a child and could not give her husband more children. The exchange of words resulted into both fighting publicly and in the process Mrs. Okafor descended on him and battered him.

She has landed in trouble as the police charged her before the Ejigbo Magistrates court for assault and conduct likely to cause breach of public peace.

She pleaded not guilty.

The prosecutor, Inspector G. Simon, did not oppose her being granted bail.

Thus, the Presiding Magistrates, Mr. L.K.J. Layeni, granted her bail in the sum of N50,000 with one surety in like sum.

The housewife was remanded in prison custody pending when she will perfect her bail condition. The matter was adjourned till 14th November, 2018.